Once upon a time… I was a Witch without deities.  Before finding entrance (finally) into the witchy world, I had been an atheist for some time – learning to prize rationality and skepticism over belief.

Leading into and during my atheism, I had lived through profound moments of connection to what I recognized as Divine. This recognition paved the way for understanding when Freyja appeared.

An energy… a feeling greater than myself… connection to the Universe.

December. Standing on the beach. Darkness descending. Wind whipping salt spray all around.

The icy tide creeps in, washing over my bare toes.  Gazing towards the sunless sky, I feel the pull of all that has ever been, all that is… and I’m lost in everything that is more than myself.

Image by Free-Photos from Pixabay

Through moments like these, I became certain a universal sort of divine energy existed…

Then, I began attending a festival twice a year.

In public rituals, I called to the spirits of Air. Lord and Lady, or perhaps specific deities, were addressed by others.  They were inconsequential to me.

I was connected to the elements… to divinity through the Source. I had no need for specific deities to worship.  No need for devotion. We could be our own deities… the concepts of “gods” were just ideas to inspire us.

That Thursday night… after an emotional ritual and truth sharing among friends… I walked out to the ritual circle with my hula hoop – ready to dance off the emotions and find some clarity.  I moved to the South side of the circle, opposite the drummers in the North, where I wouldn’t be disturbed – where I could dance freely without interrupting the dancers circling the fire.

Placing my hoop on the ground, I knelt facing the fire.  I closed my eyes and saw flames and skeletons dancing. I centered myself, then I stood and began to dance with my hoop.  A few times, I lost my grip on the hoop… as if it were pulled from me. I found myself jokingly cursing the air, “Dammit Loki!”  This was unusual in itself… as I wasn’t one to blame external forces, especially not a deity, for difficulties I was encountering.  However, in that moment… Loki was there… and I knew it!

Wait, what?!  After about the third instance of this, I stomped over to my hoop, laying on the ground, picked in up, DETERMINED not to let go of it again.  I slashed it through the air and suddenly… I wasn’t quite myself. Freyja was all around me… within me… I was an epic sensual warrior goddess, beautiful and graceful.  I didn’t drop the hoop again.

My dance was intense and exhausting.

My breath, jagged and shallow, I went to sit beside my friends and relax.

Watching the other dancers… I reflected on what had just occurred when a compulsion hit me.

The suggestion that sprang to mind was even stranger than suddenly BEING a goddess. A thought entered my head… I considered where I was… who I was with… all of the insecurities I’ve ever had… and I followed the impulse.

Grabbing my hoop, I stood.  Took a few steps forwards for space, and before I could lose my nerve, I stripped myself bare**.

Dropping my clothing on the ground, I turned on my LED hoop, Pixel was her name, and I danced, lights spinning around me, encased in magick.

To this day… I’ve never felt the flow of my dance in the same way. The courage and confidence I exuded – a love spell I was casting on myself.

It would be years before I’d formally dedicate myself to Freyja – she who is gloriously, deliciously sensual.  She who is and seeks beauty. She who claims half of those slain in battle. She who is sought after by giants. She of the falcon cloak. She who cries tears of amber and gold.

Prayer to Freyja by @serendipity_wyrd. Graphic created by Serendipity Wyrd.

She, who has lent a piece of her energy… to my soul.

*Autumn Meet is the name of the Fall gathering of the Phoenix Phamily. This particular festival had a Norse/Viking theme with

**Festival (especially around the fire late at night) is clothing optional

I can also be found wandering The Witches’ Realm, a Facebook group by Keeping Her Keys where we discuss all things related to witchcraft. 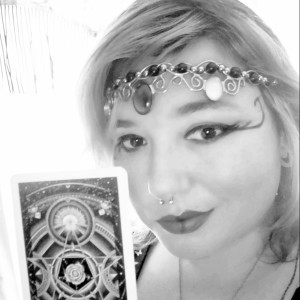