For January babies, garnet the perfect birthstone. It serves as a burst of fire in the ice cold of January. In fact, I know the virtues of garnet intimately. I grew up receiving the lustrous red birthstone as jewelry of all kinds. My grandfather began gifting these gems to me from my first birthday on. At the time, it seemed appropriate. In short, the mineral is as solid and steadfast as he was.

First things first, the word garnet derives from the granatum, the Greek word for pomegranate. Garnets range in size from that pomegranate seed to an apple. Like the pomegranate, the most common color associated with the gemstone is red. That said, it shows up in many hues. These including the yellows and oranges of the “Garnet of the Sun” and the rare serpentine green of the uvoririte garnet. The red varieties can substitute for the more expensive ruby in magickal workings as they share many of the same physical and metaphysical properties.

In fact, garnet is one of the most abundant gemstones on Earth. As a result, the gem has enjoyed popularity throughout much of human history. This sparkling mineral has been a part of human culture since it adorned the necks of the pharaohs of Ancient Egypt. Since then, it has made an appearance in the Bible as one of the stones given to King Solomon. In the Talmud, a garnet lit the way for Noah’s Ark. As a result of its place in these holy books, garnet jewelry was popular among clergy and nobility of the middle ages.

During the Crusades, both Muslims and Christians alike used garnet as a warrior’s talisman. Due to both its strength and blood-like color, garnets decorated armor and bows. They were even flung through the air as bullets! Garnet is also associated with the Egyptian warrior goddess Sekmhet whose name itself means “she who is powerful.” As a fearsome sight to her enemies, Sekhmet also bore the reputation as a great healer to her friends. As such, she protected them from illness and death. That’s the historical reputation of garnet itself – to cause fearsome bloodletting as well as to heal.

Whether a literal soldier or an individual fighting on behalf of herself and others, a warrior needs both protection and power to succeed. In ancient medicine, garnet served as an amplifier for the immune system, a gemstone used to strengthen the blood and bones and a detoxifier for the system. Thus, if you want to muster a show of power and strength in your own life, grab yourself a nice specimen of garnet.

Physical Healing Properties (not intended to substitute for medical care)

Hail Sekhmet, oh you powerful one

Goddess of war and healing, rays of the sun

Lady of life, the flame across the desert sand

I call on you from this very distant land

With garnet, ginger, lemon and rose

Make me strong, courageous and bold

Make me a force to reckon with, one to behold

On a nice, sunny day, gather your ingredients for the elixir. To begin, make yourself a cleansed and consecrated space. Do this according to the rules of your tradition. Next, bring water to a boil. After you get a good boil going, decoct slices of fresh ginger for fifteen minutes. Cover the pot and simmer at medium heat. After this, add rose and basil. Reduce heat and allow to infuse for five minutes. Then, strain herbs and reserve liquid. Reintroduce liquid to heat and return to a boil. When the water has started to boil, add enough honey to thicken the mixture. Reduce heat to low. Stir until honey is dissolved and the mixture thickens. The thicker the elixir, the longer it will last.

Finally, place elixir into a jar and arrange gemstones, images, statues and jewelry around the jar to infuse the liquid with the warrior attributes of garnet and Sekhmet. Do this on a sunny day, if possible. Then allow the grid to infuse into the elixir for at least an hour during the astrological hour of the sun. Store in refrigerator to keep fresh.

To use the elixir, place six drops under the tongue or 12 drops into a glass of fresh water. While you are doing this, imagine the warrior qualities you would like to instill in yourself. Feel yourself in balance, summon your strength and evoke your power. Call on Sekhmet to amp up your protections, passion and self-confidence. When needed, carry a small dropper bottle with you into “battle.” Whether that battle is work-related, a sporting match, political protesting or even just dealing with troublesome family and friends, the Sekhmet elixir can help you muster up the courage, confidence and inner strength to overcome adversity. 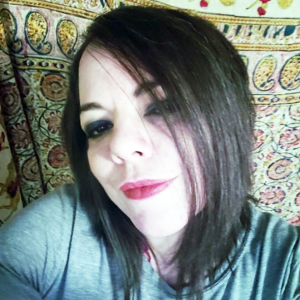 Nikki Zang Roszko is Editor in Chief of The Way of Witch community blog. She is a Hedgecrossing Hekatean Hedgewitch with 22 years active experience in the craft, although she has always been a witch. Specialties include Tarot, herbal alchemy, sigil magick and more. Her blog, Rock and Roll Witch, tackles all manner of witchery, shamanic healing and spiritual growth. Through writing, doing readings and acting as guide, Nikki helps others stoke their inner witch fire in order to transform their lives. She lives and works in Portland, Oregon with her partner and a multitude of feline companions. She makes ritual objects, supplies and magickal dirt as Witch of Fire.